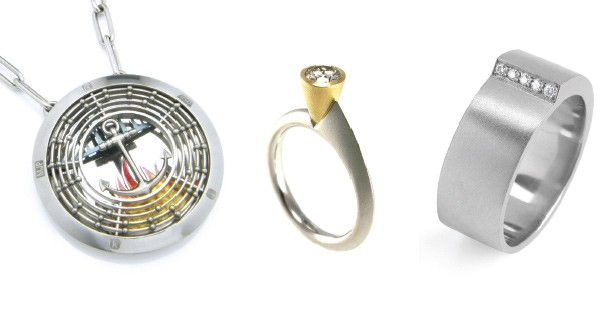 In the first of a new series featuring experts from Assay Office Birmingham, Martyn Pugh, who was recently appointed a trade warden, shares his experience of working with palladium.

Martyn Pugh, an experienced gold and silversmith, has been experimenting with palladium for some time and believes there is great scope for designers to introduce innovative new products that customers are always looking for.

“The time is ripe for palladium in the UK,” says Martyn. “It was used occasionally in the 1930s for setting, introduced again in the 1950s, and in recent years several European manufacturers have used it both in combination with silver or on its own. However, it has never received serious attention in the UK due to a lack of public recognition as a ‘precious’ metal. The new hallmark has instantly supplied the necessary credibility.”

Palladium is being used extensively for wedding rings as a cheaper alternative to the coveted status symbol, platinum, but with none of the tarnishing or wear problems associated with white gold. Palladium is approximately half as dense as platinum, being 12gms per cubic centimetre as opposed to 20gms for 950 platinum and 16gms for 18ct white gold. The identical article is obviously much less expensive in palladium than platinum as it contains less weight of a significantly cheaper metal. A 950 palladium alloy is approximately half the price per gram of 18ct gold at present, although additional making costs narrow the difference considerably.

Lightness is also a huge advantage in practical terms. Bold earrings made from platinum could be uncomfortably heavy, whereas a palladium alternative could be very wearable. The weight of the pendant shown below would break the string of pearls if it were platinum.

Recent technological advances have created new opportunities. When palladium is heated it combines readily with hydrogen and oxygen making it very difficult to cast. The new ‘gas cover’ technology has now made it possible to cast palladium consistently and without porosity, as evidenced by the outer rim of the ‘Birmingham Assay Master’s Badge of Office’ shown above, designed by Martyn and cast by Birmingham caster Jewelcast.

Technical features
Martyn is keen for designers to experiment, as he has done. “Don’t make the mistake of simply using palladium to reproduce an item you already make in other metals without checking that its design suits the material’s manufacturing and wear characteristics,” says Martyn. “Design specifically for palladium. For example, the metal has no memory, so once bent it stays bent and doesn’t spring back. This is obviously an advantage when setting stones. However, I have found that claws are a little less resistant to distortion and, consequently, they need to be slightly thicker than for platinum.”

The most challenging aspect of working palladium is that, although in the annealed condition it is particularly soft, it work-hardens much faster than other precious metals, thus frequent annealing may be required. However, this does not prevent it being bent, forged, and rolled by an expert user. It is a ‘sticky metal’

Which needs to be sawn with a lubricant, which should also be used when machining with a sharp tool, preferably in the hard condition. Palladium can also be laser-joined, engraved and enamelled by a skilled practitioner.

Any precious metal solder with a fineness over 700ppt can be used. Martyn recommends platinum solders as they have a better colour, palladium solders being used where lower temperatures are required. Use of high temperature fluxes will combat the blueblack oxide that forms when heating with no protection from air. Ordinary pickle has no effect on this oxide, but it can be removed by briefly passing the torch flame over the cool surface or by polishing.

Finishing should be as for platinum where abrading finally with a fine grit is necessary before polishing.

The pieces illustrated here demonstrate that with patience and expertise, fabulous results are possible and palladium surely has a bright future.

Palladium has much in common with platinum – it is very white, does not require plating and does not tarnish. However, it is less dense and less expensive and the consequences of mistakenly identifying platinum as palladium or vice versa could be costly. There is no quick acid test available to identify palladium. As with platinum the most popular fineness is 950 and the trade is so concerned that the two metals will be confused that the four UK Assay Offices have taken the unprecedented step of changing the original fineness mark to make it more distinguishable.

The first shape was a trapezium, clearly different from platinum when perfect but with potential to be reduced to fainter straight lines as the hallmark becomes worn. After many key businesses voiced their worries the outline has been amended to three adjoining circles, so all lines are curved. The new shape was introduced from January 2010 when the mark became compulsory, but the trapezium will remain legal and there is no need to re-hallmark anything. A new statutory ‘Dealers Notice’, which all those dealing in precious metals are legally required to display, is available from the Assay Office, clearly showing both versions of the palladium mark.

FOCUS ON THE EXPERT

As a leading goldsmith and silversmith, Martyn has over 30 years of experience in the industry, which has provided him with a deep understanding and working knowledge of his discipline. He works at the confluence of design and technology and is known for his tenacity. His work regularly challenges established norms and ventures into uncharted territory from a technical point of view. Martyn is a member of the British Hallmarking Council, a past chairman of the BJA, a liveryman of the Goldsmiths’ Company, a fellow of Birmingham City University and has recently been appointed as one of the three trade wardens of Assay Office Birmingham.