In this month’s instalment of Assay Office Birmingham’s series looking at the challenges faced by its experts on a daily basis, our attention turns to the potential of modern-day laser marking.

One of the bonuses of working at the Assay Office is that it is impossible to predict exactly what will happen next! Every now and then a small piece of history crosses the threshold without warning and stretches the experts that little bit further.

An Olympic-sized challenge arrived in early July – two sterling silver batons, both to be marked with the Union Jack, and one with the American flag and one with the Jamaican flag. Both batons also needed a full Diamond Jubilee hallmark and an inscription.

The urgent request came from local Birmingham silversmith L J Millington, which had just received a commission from the City of Birmingham to create unique civic gifts for the two Olympic athletics teams training in Birmingham; quite an honour, and a moment to be relished by the experts in the laser marking room at the Birmingham Assay Office, where Julie Burns, senior laser marker, Suki Singh (pictured below) and the rest of the team are continually pushing the boundaries of what can be accomplished by their fleet of laser machines. 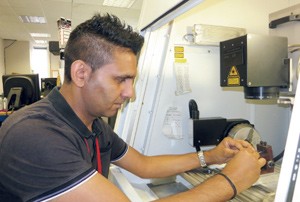 Applying hallmarks by laser was pioneered in the late 1990s, when the steady increase in foreign imports of finished lightweight and hollow goods rendered traditional hallmarking methods inappropriate for some items. Furthermore, many importers did not have the facilities to refinish items after hallmarking. Striking a mark with a punch, however expertly handled, will inevitably cause displacement of metal or ‘bruising’, and can seriously damage a product that is hollow. Finished items are more difficult to mark than traditional castings, needing a highly polished bed to support the article and therefore reduce the impact of the mark being punched.

From a cautious beginning, laser hallmarking has truly found its niche, particularly as soaring precious metals drive manufacturers to make lighterweight products to hit affordable price points. The laser process exerts no physical pressure on the item, but burns the mark into the metal using a laser beam with pinpoint accuracy. Tiny gem-set rings with hollow shoulders, lightweight bangles that would cave in under even gentle pressure from a fly press, and spindly earring posts can all be hallmarked by laser without damage to the product.

The only finishing required after laser marking is the removal of the ‘soot’ or burn mark, which is carried out in the laser room; and in the current struggle to be competitive, this benefit is being exploited by local manufacturers as well as importers as it cuts out the refinishing stage of the process, reducing labour costs and speeding up delivery times.

The laser room at the Assay Office is now equipped with a battery of laser machines and can respond to any request, from tiny marks on a pendant bale to a large, traditional, full spread mark on a piece of silver. The initial reaction to laser marks back in the 1990s was that they did not look like a ‘proper hallmark’, but experience and further investment has overcome this. The ‘deep relief ’ laser mark is created by burning away the metal surrounding the mark as opposed to burning in the mark itself, and this option is now widely used for hallmarking large silverware. The size, depth and style of the mark can be changed by the operator adjusting variable controls on the laser if required.

Before a mark can be applied by laser for the first time it has to be created as a piece of artwork for the software system. This is relatively simple for a straightforward hallmark, but as the demand for non-statutory laser marking grows it has become significantly more complicated. The preparation of good artwork is very important as a sharp, high-quality mark can only be created from a clean graphic with the appropriate level of detail. Suki Singh, senior laser marker, has spent hundreds of hours experimenting and developing increasingly complicated artwork and is now confident that anything is possible.

As the team offers laser marking to a wider, non-hallmarking market, the skill of the experts becomes more and more important. In developing the artwork for the flags on the silver batons, Suki faced an obvious challenge: how to create an instantly recognisable miniature rendition of the colourful Jamaican, American and British flags in monochrome – and on a curved surface. Meticulous preparation of the artwork overcame this as he carefully filled different areas of the flag with cross hatchings in different directions and density, and also varied the number of passes to add a feeling of texture.

Suki’s portfolio of artwork contains a wide variety of examples as customers use the benefits of laser marking to add value to their products. There are logos for well respected brands such as Fortnum and Mason; and designer signatures and a range of crests and badges for ceremonial ware also benefit from the versatility of laser marking.

And the non-statutory work is not all one-offs; in the last two years a huge volume of commemorative coins and other memorabilia to mark the Royal Wedding, the Diamond Jubilee and the Olympics have flowed through the laser room. Some of these were limited editions, requiring sequential numbering and very tight control, while others required the careful application of logos and inscriptions.

Julie and her team believe laser marking still has great potential, particularly as their skills in producing more and more complex graphics continue to develop. They are all looking forward to the next challenge, whatever it may be.

Supervisor of the Laser Room Julie Burns has worked at Assay Office Birmingham ever since she left school and has over 35 years’ experience of hallmarking. Julie’s skills and expertise as an accomplished hand marker and highly competent fly press operator have prepared her well for the challenges of the Laser Marking department. She has huge knowledge, making daily judgements as to the size and positioning of the mark, and deciding on the best method to mark tricky pieces. Supported by senior laser marker Suki Singh, who specialises in creating the complex graphics required, Julie leads a team of dedicated laser operators who boast a further half a century of laser marking experience between them.